Last Wednesday, my class went for an excursion. We went to Deventer, one of the oldest city in Netherlands. You know, as part of my Natural Hazard Module, we visited Deventer to see the city’s Room for the River: Ijssel River that crosses the city center. Netherlands is broadly known as the country with high flood occurrences from past hundred years. This country also has high coping capacity to maintain their natural flood hazard since most of their ground is below sea water level. Just imagine how catastrophic it will be when large amount of discharge passing the channel without enough room to transport the water. Room of the river generally will allow the excessive water to travel to the outlet without causing severe damage.

Deventer as the one of the oldest city, obviously treasures many important and historical sites. It would be a lot of loss when a disastrous flood occurs. The first spot we visited was an alley that so look alike with Diagon Alley version of Harry Potter Movie. This alley has interesting story, every year the residents usually held a Charles Dickens festival. My Lecturer, Bart told that this alley was an usual place Charles went to write or just to pay a visit.

The next stop is the riverside, we crossed the river with boat and take some pictures near the bridge.

yellow Narcises bloom in the side of a channel

Across the bridge there is an old windmill, also one of historical landmark that preserved by the Municipality. This windmill specializes in producing raw materials for furniture. This windmill is occasionally used to saw logs (many kinds of timber) and provide wooden sticks, boards, but not in any more commercial circumstance. This was my first time to see wind mill directly and experience how it works. 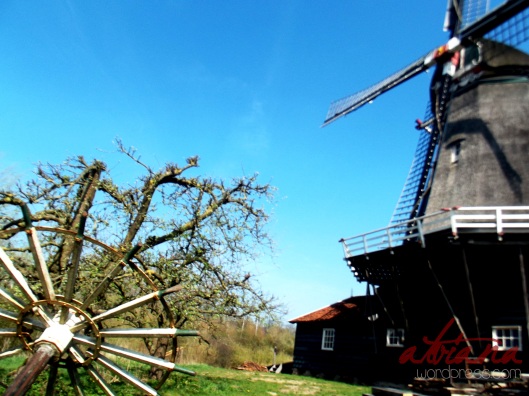 We took another stop at Sandton Ijssel Hotel, a four star hotel located in the riverside near De Worp (a residential cluster outside Deventer which is included of Deventer region, separated by Ijssel River) and Planston Worp, the oldest park in the Netherlands with couple of very old Oak Trees. We took a break for a glass of coffee, capucino, or in my case, a bottle of apple juice. While when we are passing the Planston Worp, We spotted an  ice cream van full with many flavors of gelato. Most of my friend and me then enjoyed a scone of gelato with crispy cone only by 1 Euro. I chose chocolate one of course. And I think it was one of my best chocolate ice cream I’ve ever tasted.

With my lecturers explanation about the Room of the river and its role to mitigate flood hazard in Deventer, I spent the entire morning and afternoon, enjoying the rare sunshine, chilly winds, a beautiful landscape of Deventer.

How’s that? very different from any place in Indonesia, huh? especially for the river side part…